Example: Structural elements for the design of a tubular frame

Since early 2015 a team at the chair of engineering design and CAD of the University Bayreuth is working on developing an experimental three-wheeled vehicle in the style of the Morgan Threewheeler (see fig. 1). The engine, drivetrain and swing arm are adapted from a deconstructed motorcycle. The declared goal is an official road approval by 2018 with a gross vehicle weight of 750 kg (1653.5 pounds) [1]. 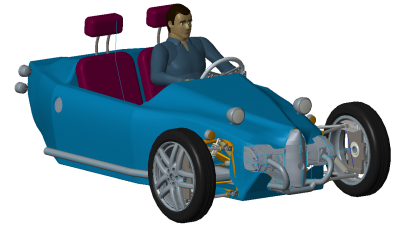 Figure 1: View of the complete vehicle

A core element is the construction and design of a tube frame using, among others, the finite element analysis software Z88Aurora®. To do this, several structural configurations were analyzed.

Figure 2 shows a tube frame of a three-wheeled vehicle, simplified as a 3D lattice framework that is simulated using beam elements. A finite element analysis using continuum elements would deliver total displacement results of a similar accuracy but use an increased amount of computing power and storage [2]. 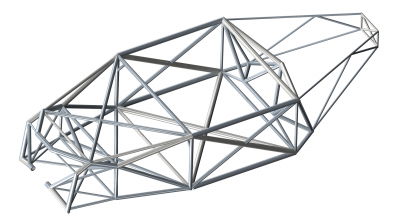 Beam elements using the Euler-Bernoulli approach are the most suitable 3D structure elements to simulate bending stress in Z88Aurora® (e.g. beam no. 2 or beam no. 25). These elements are accurate within the scope of the Bernoulli beam theory and Hooke’s law. Unlike in the case of continuum elements it is not the numerical solution that is used here, but rather the analytical approximation. The node-based model of the vehicle frame is shown in figure 3. After defining the coordinates these nodes can be connected with structure elements using the button ‘create elements’ in Z88Aurora®’s pre-processor. 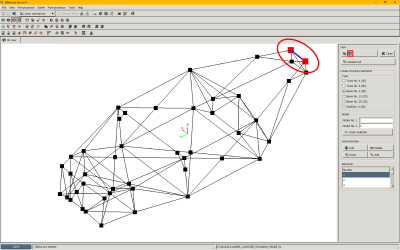 After generating the lattice framework the element parameters, in this case the cross-sections of the single bars, are defined. Individual geometries are possible for each element, as is shown in figure 4. 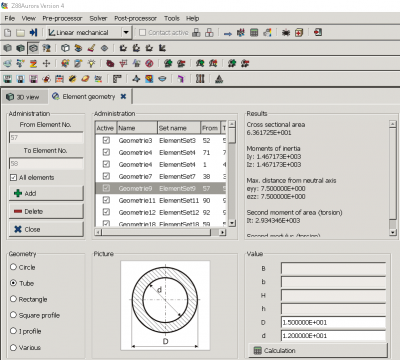 By entering the dimensions of an element the necessary parameters for the finite element analysis are automatically calculated:

A ‘worst case’ application of force that can occur during operation is simulated by assuming a head on collision at 50 km/h. Figure 5 shows the fixed and the affected nodes in this case.

The frame is allowed to deform by

[3]. This gives us the average acceleration force constantly applied to the frame:

Tubes with a higher cross-section area (and thus a higher stiffness) than the other tubes are connected to these four nodes and take a quarter of the force each [3].

After a successful simulation of the head on collision the displacements occurring within the frame can be viewed in color and with magnified scaling using the user interface of Z88Aurora® V4. The equivalent stresses are not displayed, since it is impossible to calculate accurate stresses at welding seams and notches using structure elements. Should stress concentration factors be required (for example when calculating shaft shoulders) volume elements or axial-symmetrical elements are to be used. The output file z88o3.txt contains the tensile, shear and pressure loads of the elements as well as the bending stresses  and  of the element nodes. Using the von Mises yield criterion the equivalent stress is calculated from these stress elements. This equivalent stress may not be greater than the critical boundary stresses so as not to buckle or break the frame. 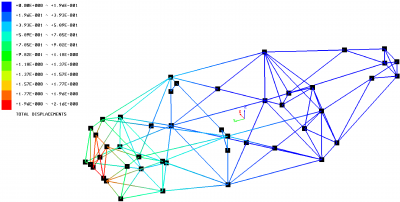 Figure 6: Total displacements of the structure model viewed in the post-processor (scaling factor 5)

Over the course of several iterations the structural parameters of various areas of the frame are optimized based on the resulting stresses, meaning an increase of cross-section area in high-stress areas and a decrease in lower stress areas. Simultaneously the basic structure is improved by adding beams in the direction of force application while making sure to create triangles and reducing the free buckling length of critical elements.

Additional load cases are simulated similar to the head on collision:

The final frame result seen in figure 7 is a compromise between ease of manufacture, weight and high torsion stiffness [1].